The Solo Falcon cockpit is a replica of the screen used Millennium Falcon cockpit as seen in Solo: A Star Wars Story. This project was commissioned by Lucasfilm for the Millennium Falcon Experience Tour to promote the release of Solo: A Star Wars Story. It was built in a 40ft container by members of BCD and Lucasfilm staff and featured original parts provided by Pinewood Studios. In July 2018, the complete cockpit was dismantled by BCD and shipped back to Belgium to make it convention ready. The original parts have been replaced by exact replicas.

The set displays the entire front and rear cockpit area with panels, front and read navigation chairs, console and canopy. The windows are covered with a rear projection foil to allow a scene from space to be projected onto the canopy. Some of the switches and buttons are functional.

The entire prop is perfect for photoshoots and interviews with actors and visitors! The Millennium Falcon Experience 2.0 continues. 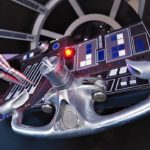 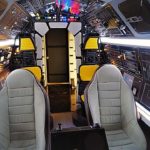