"Well, if droids could think, there’d be none of us here, would there?"

It all began in a galaxy not so far away…

1997,  Star Wars was back with the special editions of the original trilogy.
Big time Star Wars fan Stefan Cembolista and some friends made a plan to spend the opening weekend in Star Wars costumes.
They created two Imperial stormtrooper costumes from scratch!
Only one costume proved to be wearable at premiere night and the foundation for a costume club was created right there and then.

1999, the world was looking forward to ‘Episode I – The Phantom Menace’.
Not only the internet was on the rise, but a whole new Star Wars universe was taking shape.
After making the Stormtrooper costumes, Stefan and Wim needed to make something BIG, something more spectacular.
They decided to make a replica of the ‘AT-AT’, as seen in ‘The Empire Strikes Back’.
They searched the internet for reference pictures and work started in Stefan’s garage.
They built a construction mostly made out of wood and cardboard.

The AT-At was presented at the premiere night of ‘The Phantom Menace’ in Brussels and received an overwhelming amount of positive reactions from the visitors. The news spread and soon Stefan received a call from a toy convention to bring the AT-AT over.
Due to its huge size transporting thr AT-AT was a logistical roblem so Stefan suggested to bring over a new prop. He built a 1:1 Speederbike from ‘Return of the Jedi’.

The Speederbike was featured at the convention and Stefan started a costume club called BCD (Belgian Costume Division).
The response was overwhelming and other Star Wars enthousiasts signed up.
BCD started out with 3 members and tripled in size after just one weekend.
When ‘Episode II’ and ‘Episode III’ premiered, the club kept growing, due to the rise of the 501st Legion in Europe.
Visitors from all over the world were flocking together at events to have their pictures taken with
Stormtroopers, Rebels, Darth Vader or R2-D2 and with the Speederbike or AT-AT in the background.

Other BCD members came up with plans and started building new backgrounds for photo opportunities.
John built the Chess Corner and the Outrider set, Clint the Bunker from Endor and Jos a Snowspeeder.

In the spring of 2006, George Lucas wanted 200 Stormtroopers from the 501st Legion to march in the Rose Parade in Pasadena, California. Hoping to be chosen to participate,
501st members from all over the world introduced themselves in spectacular and sometimes funny videos.
The Belgians created a nifty little video at a WWII fort which amazed the head of Fan-Relations at Lucasfilm with its professionality.
Promptly Lucasfilm Ltd. sent a production team to Belgium to interview Stefan and his BCD members.

The club had set up their props in a warehouse so the film crew could have a good look at how the props were built.
Six Belgian 501st members were asked to join the parade. They made a lot of friends and were able to talk about the lifesize props BCD was building.
The recording of the interview, which also showcased the props, made its way to Lucasfilm headquarters and to Fan liaison Mary Franklin. Impressed with BCD and with their work, she arranged for the Belgium props to be featured at the first Celebration Europe in London! 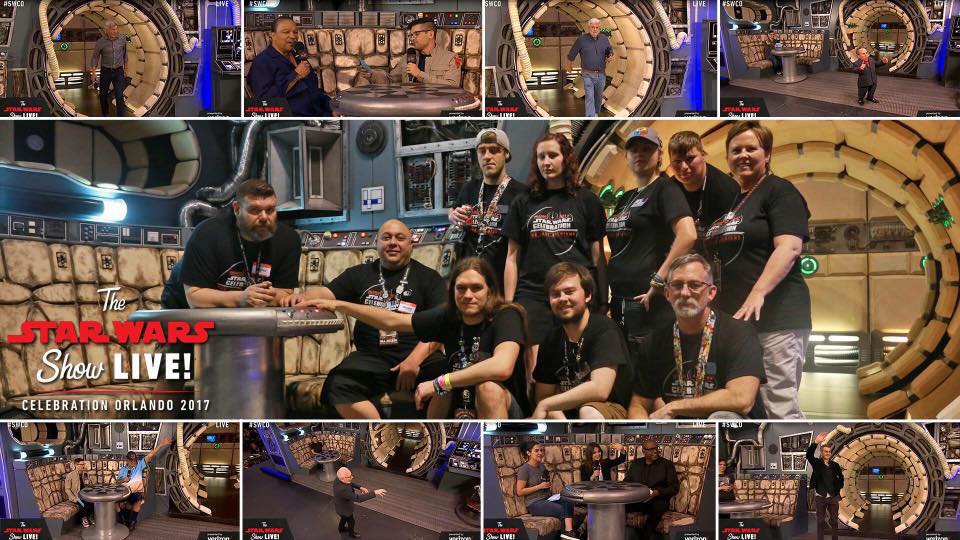 Since 2007 BCD  has been present at all the official Star Wars Celebrations in Tokyo, Orlando (3 times), Anaheim, Chicago, Germany and London.
Tens of thousands of visitors had their picture taken with our props.
BCD evolved from a small costume club to an official non-profit organization (‘VZW’ in Dutch) with many members.
We have built props including: the Hoth Medical Bay with bacta tank and medical droids, a life-size 1:1 TIE Interceptor (out of commission), a Snowspeeder, an updated version of the AT-AT, a new version of the Millenium falcon set, the full-size Vader interceptor from Rebels, Rey’s Speeder, several Kyber Crystal crates from Rogue One, a life-size Viper Probe Droid and a life-size animatronic Tauntaun from Hoth, the Solo Millenium Falcon chess corner and Cockpit, and the treadspeeder fom the 2019 The Rise of Skywalker. We keep on building new stuff all the time!

BCD is now internationally known as ‘The Belgian Prop Builders’. We’ve been to San Diego Comic con, events in Paris, Denver, Barcelona, Germany, the Netherlands, Denmark, Singapore and many more all over the world.